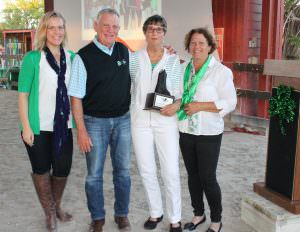 In 2001, Dick Proctor showed up for a sidewalker volunteer training. He and his wife, Wilma, read an article in the Naples Daily News about the new organization, then called “Naples Equestrian Challenge.” They knew it was the perfect place for their family to give
back. “Horses and children… what could be more satisfying than being a part of an organization that brings together a child who needs some extra help with a horse who needs a job? I knew this was the place for us,” Dick commented. “In retrospect, We kept coming back, as a core group of us really wanted to see the programs succeed,” shared Wilma.

Hearing this couple tell their stories of giving would inspire anyone. This past March, Dick and Wilma were awarded Barn Dance Volunteers of the Year. Seventeen years into their volunteer and giving tenure at NTRC, they stood side by side with their daughter, grandchildren, in-laws, and friends as their names were announced as the recipients of this award. And in that moment, this inspiration was clear.

Dick and Wilma have volunteered for nearly every single Bootstrap Boogie Barn Dance and Hoof & Hike Poker Run. They tell stories of fire ants, orange paint and rolling silverware in slippery napkins. They tell stories of supporting capital campaigns, rider scholarships and fundraising events. They tell stories of riders they helped in lessons, of the smiles and reactions of parents seeing their children become stronger and more focused, or of the history they have with a rider they’ve known for a dozen years. While they can tell all these stories, there’s another story NTRC witnesses through them.

Dick and Wilma Proctor are two authors of an incredible family who donates time and treasure. Not a week goes by when one of these names isn’t spoken at NTRC: Christy and Bob, Lisa and Mike, Ryan and Mari, Rick and Lisa, Steve and Helen… Dick and Wilma, Dick and Wilma. They’ve planted their family tree at 206 Ridge Drive, making an impact that not only supports programs for people with special needs, but also inspires staff and volunteers to do their best – as the Proctors’ example of the best is contagious.

For many, giving is personal, inspired by a cause or a commitment. It is rare for an organization to witness such a level of giving from each individual in a family – it’s still personal, but it’s familial too. And honestly, it’s a gift. Dick and Wilma, from our herd to your herd, thank you for adopting NTRC and teaching us the many values of giving.